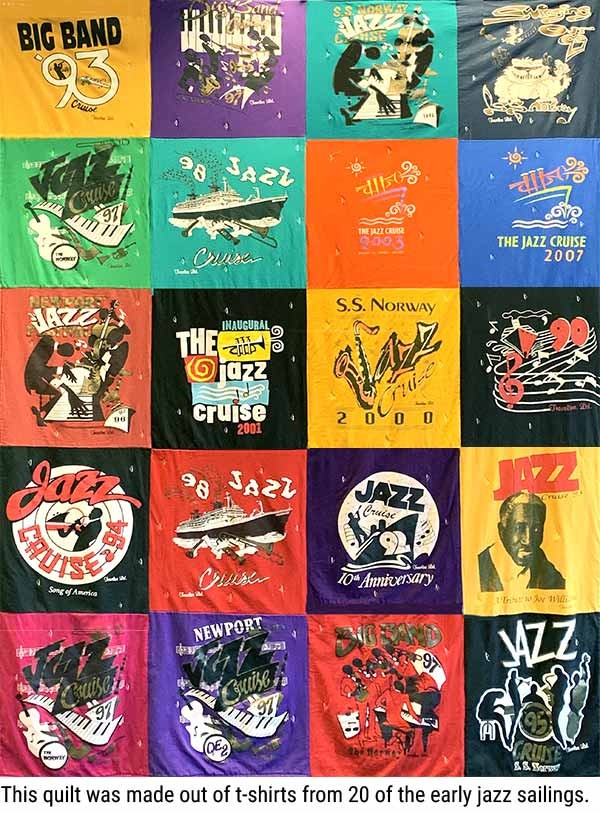 The first sailing of The Jazz Cruise, the first full-ship charter cruise in the world dedicated to jazz, took place in the fall of 2001, but its origins can be traced back to 1983, when Norwegian Cruise Lines (NCL) introduced a cruise program that featured jazz music as the primary form of entertainment. Noted jazz scribe Bob Blumenthal, writing for The Christian Science Monitor in the fall of 1986 on the eve of the fourth Annual “Floating Jazz Festival,” captured the excitement of this new form of cruising and foreshadowed something even larger.

“Sounding the high seas took on new meaning in 1983, when the SS Norway, flagship of the Norwegian Cruise Lines, added a jazz cruise as a one week experiment. Jazz proved popular enough to win a place among competing themes and Norwegian Caribbean is now preparing for its fourth annual “Floating Jazz Festival” to take place during the cruises of October 11–18, 1986, and October 18–25, 1986.

A trip on the last of the 1985 jazz cruises suggests that jazz, America’s gift to world music, may be an ideal theme for the competitive cruise industry. The Norway, at least, has learned how to offer club and concert performances that complement the basic cruise experience. It wraps jazz around the regular schedule of ports of call and shipboard activities as not to infringe upon the non-fan.

No matter how many name musicians a ship carries, or what the theme, the cruise remains the thing – especially on the Norway, the world’s largest cruise ship (formerly the SS France).”

Anita E. Berry and her Traveline Ltd. group sailed on the “Floating Jazz Festival” for the first time in 1985. You cannot blame Blumenthal for his claim that “the cruise remains the thing.” After all, those sailings were not full-ship charters or even close. The first couple of sailings were large groups, somewhere around 40% of the ship. By the time Norwegian’s program ended in 1999, they were up to 55% of guests, but remember the SS Norway was a large ship. Most likely there were 1200 guests for most of the 16 years the Floating Jazz Festival existed.

NCL ran the cruises as a corporate “affinity” program, part of an industrywide effort to create special interest cruises particularly during the shoulder seasons for cruising. NCL hired Hank O’Neal and Shelli Mae Shier to run the program. Hank was the Vice President at HME Records and was well-known and respected in the jazz world. Shelli was President of Hoss, an entertainment company that presents concerts. Hank secured the talent and did the programming and Shelli handled the operations. There were additional people involved from NCL, a fact that would become an issue in later years. 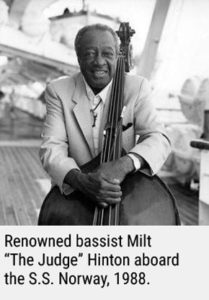 The talent of the ship was amazing. Here are some of the players on the 1986 sailings: Joe Williams, Dizzy Gillespie, Woody Herman, Cab Calloway, Buddy Rich, Milt Jackson, Clark Terry, Dick Hyman, Anita O’Day, Gerry Mulligan and Mel Powell, to name a few. There were usually around 40-45 musicians and, because the program shared the ship with non-jazz guests, the performances were usually late at night and had to be shoehorned into venues as they became available.

Guests were pulled in by travel agents and jazz groups. The incentive for those bringing on guests were commissions. The incentive for the cruise lines was filling a ship at a time of the year when doing so was more difficult. Every sailing of the Floating Jazz Festival was in the fall, or as cruise people say, “Hurricane Season.” The cost of the cabins was lower than at other times and the placement was perfect for the musicians. It was after the summer season and right before the holiday season.

Over time, the cabin sales were dominated by four groups: Joe Segal of Chicago, a group from England that had ties to the California market, a travel agent from Arkansas whose husband was a cruise ship captain, and Anita E. Berry from St. Louis. They were often referred to as the “Big 4.”

Joe Segal was a legendary jazz producer. His Jazz Showcase club famously floated from venue to venue in Chicago from 1957 to 2000. In later life, Joe was inducted as an NEA Jazz Master. The group from England included true jazz aficionados, who used their fees to cover their travel to and costs of the cruise. Our Arkansas-based travel agent relied upon her cruise captain husband for inside benefits and special incentives for her guests.

Anita’s first and second husbands were huge jazz fans. Both played instruments (saxophone and trombone, respectively), so she was familiar with the world of jazz. More importantly, she was a sharp businesswoman. Resembling someone between Natalie Wood and Elizabeth Taylor, her charm and beauty offered the perfect disguise for her razor sharp mind and highly competitive desire to succeed. 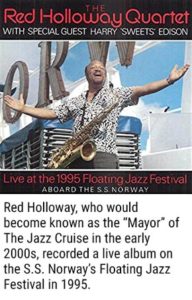 To bulk up the size of her group, Anita initiated the idea of special T-Shirts just for her booked guests. That led directly to the beginning of the T–Shirt Party. The sight of hundreds of people wearing special shirts and having free drinks made quite a splash and enticed folks to join her group. As you may know, Anita’s T–Shirt Party has become a staple of every cruise produced by Entertainment Cruise Productions since its inception. The Smooth Jazz Cruise, Blue Note at Sea, Star Trek: The Cruise, The 80s Cruise, The Gospel Music Cruise, NASCAR: The Cruise… all have had amazing T–Shirt Parties.

As a coalition of jazz producers, the four group leaders wound up working together better than you might suspect. Anita was generally viewed by the group as the least experienced both in terms of jazz knowledge and cruise operations. Yet, not only did she survive in that atmosphere, she excelled. It did not take long for Anita to become the #1 producer of cabins on the cruise. She was soon being consulted on talent issues, ports-of-call and other aspects of the program. Tensions grew among the Big Four, for sure. Each one angled for something special for their group. But, “Jazz” as a theme cruise was benefitting each of them. Joe Segal was able to promote his Chicago jazz club, Jazz Showcase. And the others were making money without having to do too much work.

NCL’s Floating Jazz Festival was among the most successful cruise line sponsored theme cruise programs and covered a span of years much longer than anticipated by its founders. Yet, by 1999, clouds were gathering over this lovely program. The Big 4 were kept in the dark as to most of it, but soon they were caught up in a storm that would challenge their ability to continue to produce their jazz cruise program.