THE FIRST CUT WAS THE WEAKEST

Our heroine, Anita E. Berry, had been roughed up by her former Floating Jazz Festival associates when she proposed a consortium to charter a full ship for the continuation of the jazz cruise program that Norwegian Cruise Lines had just cancelled. Undaunted by the rejection, Anita quickly decided that she would move forward with her dream of a full-ship charter for jazz, even if it meant doing it alone. She summoned up the words of her father: “Believe in yourself… never take a partner unless you absolutely have to do so.”

To further recap the chain of events, Anita selected Holland America’s m/s Maasdam, a 1,258-passenger ship that had solid elegance and good venues. She hired Cherrie Scheets to serve as Music Director and Don Wolff to serve as emcee of certain events. She hired Gary Baldassari to make sure that the sound, lights and production was top-notch.

Then, she put together an amazing lineup of musicians and set about to sell the staterooms. As she hoped, the entire ship was sold out in weeks. Compared to the predictions of disaster and loss, you could not blame Anita and her cohorts at Traveline, Ltd. for doing a bit of gloating. All that seemed left was the victory lap, stepping up on the podium to accept the medal and hoisting the trophy.

Then, it happened. The United States was attacked by terrorists on 9/11, 48 days before The Jazz Cruise ’01 was scheduled to sail. Air travel was halted and our nation was in shock amid continued threats and immeasurable loss.

Quite frankly, we had no idea what to do. Both in terms of our everyday lives and preparing for the first-ever full-ship charter sailing of The Jazz Cruise ’01. That proved to be a positive, for it is likely that any actions we would have taken would have been the wrong ones. Instead, the spirit of America took hold. Returning to the activities of life became a battle cry. It was patriotic, if not required, to start living your life as you had planned. 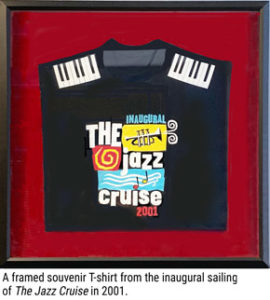 The cruise sailed at 98% of capacity and 100% of the musicians were onboard. By the way, it is not unusual to have up to 5% of the booked guests fail to show for the cruise, either due to last-minute illnesses or other factors, so a 98% occupancy level is very good in any circumstance.

Not all our steps were good ones. Most guests do not see how the equipment and other materials we use for the cruises are loaded onto the ship. Between customs issues, labor conflicts while loading and making sure that all our materials are loaded, the process is complicated. Then you add the fact that we have a short window of time to complete that process, particularly if we want our first shows to start on time. Our first “load-in” was less than perfect. We dramatically underestimated how many people we would need to “push” the materials to the correct venue and, making that process more difficult, the materials were not well marked. You could see a speaker, but you did not know whether that was to be sent to the Queen’s Lounge or the Crow’s Nest.

The Jazz Cruise ’01 did not have an opening show. That development occurred later in the history of The Jazz Cruise and is a story all by itself. Instead, the cruise opened in various venues with Performing Groups, All-Stars and Vocalists, just like every jazz festival in the world. It sounds primitive when you compare it to our current programming, but it was cutting-edge stuff at that time. With all that was going on with our “load-in” process, we were fortunate enough to have one of the first three venues open on time. By 8pm we were back on schedule and, for the most part, the rest of the cruise ran smoothly.

When you look at the lineup, there were 8 Performing Groups and 10 All-Stars. By comparison, The Jazz Cruise ’22 features 18 Performing Groups and 28 All-Stars. That is the difference between 40 or so musicians and 100 musicians. The Jazz Cruise ’01 was further hampered by the inability of Carl Fontana to perform until the last day and night. To this day, we are not sure what was bothering the legendary trombonist, but he was not feeling well. For those who sail on The Jazz Cruise, imagine having just two pianists (Shelly Berg and Eddie Higgins), two bassists (Rufus Reid and Keter Betts) and two drummers (Joe Ascione and Joe Farnsworth) for all the All-Star Sessions. They played twice each day, every day.

With all that went wrong, the cruise was a huge hit and 73% of the guests rebooked during the cruise. The response was so strong that, just like they did in the movie “Jaws,” we moved the cruise to a bigger boat, the 1,450-passenger m/s Zaandam. Yes, our first cut at doing a cruise was our weakest effort, for sure, but we did it. No one had produced a full-ship charter for jazz ever before. We were ready to take that program to the next level.