THE JAZZ CRUISE GROWS UP 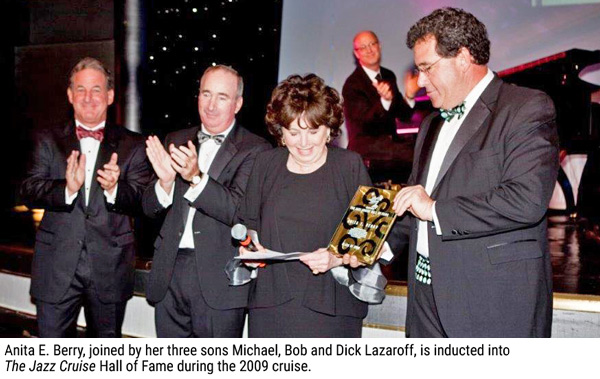 There has never been a bad sailing of The Jazz Cruise. Some were better than others and it took a while for the program to realize its potential. In fact, the old adage, “if it ain’t broke, don’t fix it” was our mantra for the first few years of the cruise.

During the first years of The Jazz Cruise, we followed this formula: a Fall sailing on a medium-sized ship with a stellar lineup and festival-style programming. The lineups grew each year in number of musicians as we realized that we needed more counter-programming to spread out the crowds. Still, around the time of the 5th Anniversary of The Jazz Cruise, some of the same old, same old was being questioned.

It was time to do something special.

The first change would be the time of the year. The fall sailing time was a holdover from the days on Norwegian Cruise Line. There is no secret as to why that time was chosen. The dates were on the edge of Hurricane Season and the rates were cheaper. Moving the cruise to a January date would cost more money, but it would increase the likelihood of good weather.

Then we looked at the ship. The 1,400 passenger ships of Holland America Line felt like the top of our capacity limit. The ships were beautifully appointed and though they lacked the bells and whistles of newer ships, their aura was a perfect background for our jazz program. And, with so much of the activity centered on one deck, you felt like you were in touch with every guest every night.

Our search coincided with Holland America’s launch of their Vista Class ships, which held up to 2,100 passengers. Though the main venues were the same, they were slightly larger in size, so that was appealing. Still, we had no idea if we could fill a ship that large. Sensing our apprehension and with a desire to book a sailing in the ship’s calendar, Holland America Line took a page from “The Godfather” and made us “an offer we could not refuse.” Basically, they gave us the larger ship for just a tad more than the cost of the smaller ship.

Programming was the next area targeted for discussion. Our Music Director, Cherrie Scheets, was a traditional jazz festival programmer. She designed the programming to have as many individual sets going at the same time as possible. Once the cruise got going, this was fine, but doing the cruise festival-style meant that there was no ceremonial “opening” or all-passenger gatherings. Having watched how successful our opening shows were on The Smooth Jazz Cruise for a few years, I was very interested in creating such a show for The Jazz Cruise. Cherrie balked at the idea. Further, she insisted that the musicians would not want to participate. Fortunately, both Shelly Berg and Ken Peplowski saw it otherwise and created our first opening show.

Since that time, the show has been the kickoff for the cruise and a way to present some of the amazing musicians in a Whitman’s Sampler type of format. Just enough to make you want more… a lot more. Each year, the depth and production of the opening show grows to the point where it is clearly one of the highlights of the cruise. This new programming note energized us — meaning Shelly, Ken and me — to try more new shows and create new combinations. Again, Cherrie was not onboard with that pursuit. She held firm to the jazz festival model, but The Jazz Cruise was more than a festival.

Our musicians did not come and go during the week. They sailed with us and the opportunity to present them in various ways proved to be an important and exciting innovation. From then on, our mission was to present our music in ways that could not be duplicated on land. The Jazz Cruise was creating its own identity, something new and unique … the “jazz cruise” experience.

Another of Anita’s first wave of participants was Don Wolff, a fellow St. Louisan who proclaimed, “I LOVE JAZZ,” in a huge and deep, bellowing voice. He was more of a Dixieland Jazz guy, but he handled interviews and served as the host of the pre-Formal Night dinner show in the Main Theater that was an array of musicians doing a tune or two as rounded up by Don. The show was performed twice each sailing, once for Early Diners and once for Main Diners. Under Don’s plan, the shows seldom matched each other and, since most musicians ate early, there were fewer musicians available for the second which resulted in the first show being far superior.

We believed that this time frame, the cocktail hour on formal night, which in the early days still meant tuxedos and fancy dresses, deserved a real show. From this void emerged The Jazz Cruise Hall of Fame Show, which was our way of thanking those who made The Jazz Cruise special and provided a framework for a show that we could repeat and which would have some context and theme. Just as Cherrie felt displaced by the opening show, so, too, did Don as to The Jazz Cruise Hall of Fame Show. Here, too, the show has grown to be among the most beloved and well attended shows of the week. That we serve free champagne and wine may have something to do with its popularity as well.

Production value then became a focus. We wanted our bandstands and stages to look great and add some pizzazz without overwhelming the music or losing our dedication to the craft of jazz. The result has been a gradual increase in the use of LED screens, photographs, videos and lighting. Production Manager Brian Rachko has magically transformed the makeshift stages on the ship into brilliant bandstands.

Finally, we took a look at our lineups. Not only in terms of the number of musicians, but also in terms of our reach. We engaged more headliners and pursued performers that we thought were out of our league, a useful euphemism for “too expensive.” With few exceptions, we have been able to attract the stars of the genre which has made the cruise’s profile and popularity even greater.

What this meant was increasing our talent budgets, which increased our travel costs and reduced the number of staterooms we could offer as we needed more accommodations for our performers. Salaries to past performers also rose. I remember Mom asking one time what we were paying Performer X. I told her the amount and she left my office in a huff. Minutes later, she walked back in, did not say a word, but placed a contract on my desk. It was Performer X’s contract five years earlier and revealed a salary half of what we were paying Performer X for the current cruise. When I told Mom that comparing payments five years apart was not fair, without batting an eye, she told me: “Well, Performer X hasn’t gotten any better during that time.”

Next, we added our very own Big Band, aptly named Anita’s Big Band. Comprised of musicians that are leaders of their own groups and stars in their own right, the band under the leadership of John Fedchock and, now, John Clayton has become an iconic element of the cruise.

Mom was skeptical of some of the changes and an ardent supporter of most of them. After all, The Jazz Cruise was her baby. We used to say that Mom had four children. Her three boys and The Jazz Cruise. They grew up side by side for sure and though her sons are three times older than The Jazz Cruise, you knew that she thought the cruise was wiser, more entertaining, more fun to be around and certainly more well-behaved.

Though the best was yet to come, a subject we will discuss in later chapters, The Jazz Cruise had turned a corner. No longer was it a slightly larger edition of what was presented as a group on NCL. It was its own program and it was wonderful.