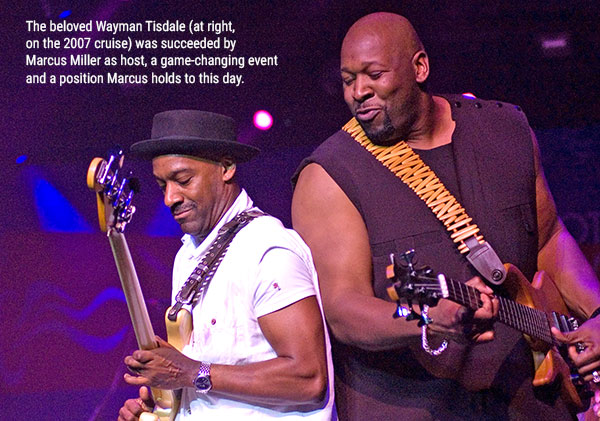 The ascendancy of The Smooth Jazz Cruise has mirrored the decline of “smooth jazz” radio stations. When the cruise began, it depended upon the “smooth jazz” infrastructure, mainly radio stations, print publications and direct mailings for its marketing. There were mega stations in New York, Chicago, Atlanta and Los Angeles. Finding the best DJ to promote the cruise was the key to success.

Fast forward to today, you could argue that The Smooth Jazz Cruise is one of the pillars of the current “smooth jazz” infrastructure. The number of smooth jazz radio stations has shrunk to a handful and there are no credible print media outlets. The Smooth Jazz Cruise and its communications with guests provide one of the most congenial, active and enthusiastic communities of smooth jazz fans around. The fans of the cruise are called “Cruisers” and you can run into them all over the country. Cruisers see each other outside the cruise dates and stay in contact throughout the year. The glue that binds them is the love of the music and the feeling that they are “owners” of the cruise. This did not happen overnight, but it happened one step at a time. From the start, the cruise’s mantra was, “We can always make the cruise different, but our goal is to make it better.” Here is how it happened:

The first few years of The Smooth Jazz Cruise were formed by Warren Hill. The cruise was comprised of great Main Shows, a few lounge shows and a host of guests that were ready to party. In the early days of the cruise, the late-night action in the Crow’s Nest, the top of the ship venue that became the “late-night hang” for passengers and musicians alike, was as much a part of the cruise as the music. Plain and simple, the cruise was Spring Vacation for adults.

Early on, you could feel that the cruise could be more. More music. A broader palette of music. Bringing the legends of the format onto the cruise, adding an R&B feel to the vocals, and upgrading the lounge shows became an important next step. Agreement on how to make it happen was more difficult. Expanding the footprint of the cruise meant spending more money, a lot more. To make that investment work and to provide Warren Hill with a bounty honoring his achievement, Michael Lazaroff became the sole owner of The Smooth Jazz Cruise after the 2006 sailing. He relied heavily on the efforts and talents of both cruise hosts, Dane Butcher and Alonzo Bodden, to make it work.

Dane was the Holland America Line Cruise Director when The Smooth Jazz Cruise 2005 sailed. The Australian was very personable and had strong show biz chops. During the cruise, Dane informed Michael that he was leaving Holland America Line and was looking for work. Michael told him that he could start with The Smooth Jazz Cruise, at least on a part-time basis, as a way to get started. That part-time job became a full-time job in a matter of weeks and Dane was an integral part of the cruise for many years.

The Alonzo story began with Warren Hill asking Michael to check out this comic that Ronnie Gutierrez, a percussionist on the cruise, had recommended. Michael met Alonzo in Los Angeles for an interview. Alonzo rode up to the meeting on a huge motorcycle. They had lunch and agreed to work together. Little did either realize that a long-standing friendship and fellowship had just begun.

Finding a new host for the cruise was easy. Michael would say that a host is not selected or created. A host is revealed. Walking around the ship during the early days of the cruise, there was one person who clearly, and physically, stood out among the others. Yes, Wayman Tisdale became the new host of the cruise, a selection that transformed the spirit and direction of the cruise overnight. Wayman was beloved by musicians and guests alike.

As host, Wayman made everyone happy and no one felt overlooked or underappreciated. Being mad at or jealous of Wayman was impossible. Any special treatment of Wayman would be explained as the common perks for anyone who was a 3-Time All-American, one of the greatest college basketball players ever, an Olympic Gold Medal Winner and an NBA star. Amazingly, Wayman was the only performer on our ships that qualified.

Wayman’s presence paved the way for Al Jarreau, George Duke, Jeffrey Osborne and Chaka Khan to join the cruise. His celebrity put the cruise on the map and was a calling card that could be used to attract others.

The inclusion of George Duke was particularly important and helped to lead The Smooth Jazz Cruise to musical heights it had not reached as yet. In today’s terms, George was an influencer in the world of jazz. Not only was he a great performer, but he was one of the top producers and leaders in the genre. A man of immense integrity, both in terms of music and life, people listened and followed his lead. When approaching jazz legends in the future, George became the “Good Housekeeping ‘Soul’ of Approval” for the cruise. If George says the cruise is okay, then the cruise is okay.

Michael tells a story about having dinner with George and his amazing wife, Corine. During the meal, Michael asked George if he would come back for the next year’s cruise. As they were leaving the restaurant, Michael felt a hand on his elbow. It was George’s. George wanted to make sure that he heard Michael correctly about next year. At that point, The Smooth Jazz Cruise had ascended. It was legit.

As this excitement was unfolding, two situations were forming. One glorious. One devastating.

With The Jazz Cruise and The Smooth Jazz Cruise becoming successful, Michael decided to entertain a jazz cruise in Europe, one that would operate under the name of the world’s largest jazz festival, the North Sea Jazz Festival. The owner of the festival was MOJO, a huge European music company and they were excited about the opportunity and were committed to selling up to 80% of the staterooms. Michael was to manage the cruise, create the programming, find the host and some of the talent, and sell the balance of the staterooms.

With little hesitation, Michael set his sights on Marcus Miller. Though he was not as familiar with Marcus’ then-current music profile, his history with Miles Davis, Luther Vandross and David Sanborn was compelling. Together with the introduction of Alonzo, meeting Marcus was the most compelling and game-changing event in the life of the cruise.

The North Sea Jazz Festival was an artistic success with an amazing lineup featuring Herbie Hancock, McCoy Tyner and Dee Dee Bridgewater. Financially, it was a disaster. MOJO greatly overestimated its ability to sell cabins. And, they found out that sailing the North Sea, even in July, was cold, windy and uncomfortable. But, from the ashes emerged Marcus as an amazing cruise host and programmer. Building a cruise program around Marcus was now set in stone.

Soon thereafter, tragedy struck. Wayman was diagnosed with cancer in 2007, just one year after he took the helm of The Smooth Jazz Cruise. He died two years later at the age of 44. May 15 will be the 12th Anniversary of Wayman’s death. Unknown to most involved with the cruise, Marcus and Wayman were great friends. One was a world-class bassist who loved basketball and the other was a world-class basketball player who loved playing the bass. They began tutoring each other years earlier. Given Marcus’ success as a host of the North Sea Jazz Festival in 2007, Marcus was invited to sail on The Smooth Jazz Cruise 2008 to help Wayman both on and off stage.

Though Marcus would also be the host of another one-off cruise, The Playboy Jazz Cruise in 2009, Marcus assumed the host role for The Smooth Jazz Cruise 2010, a position he has held ever since. During the next few years, jazz giant David Sanborn, whom Marcus had produced and played with over the years, was Marcus’ co-host. Since 2013, crowd favorite and jazz superstar, Boney James, became a co-host. Boney’s cruise history started as a Special Guest, then as a sailing guest and, finally, in his current role as a co-host. Boney and Brian Culbertson also hosted The Smooth Jazz Cruise 2011, one of the few West Coast editions of the program.

The Millennium Class Ships of Celebrity Cruises has a wonderful main theater, one which is tiered with great sight lines, a Sky Lounge that holds 450 people comfortably and was built to present music, and a Rendezvous Lounge that is also a true venue and takes the place of the Ocean Bar. Further, on top of those true venues, the main dining room on the ships can be transformed into a wonderful cabaret-style performance place, perfect for afternoon concerts and late-night shows and jam sessions.

Over these years, under the guidance of Marcus, David, Boney and Brian, The Smooth Jazz Cruise has expanded its lineup by a factor of 3, now uses three bands to perform with its Artists and has programmed lounge acts that are first class in their own right. The production levels of the shows have improved in scope and excitement every year as well. The list of top performers on The Smooth Jazz Cruise is long and distinguished, but not nearly as long as the list of amazing guests and wonderful passengers who have sailed on the cruise. Thanks to the patrons and jazz fans, The Smooth Jazz Cruise continues to be an important and wonderful jazz cruise program.