THE HUNT FOR CONTEMPORARY JAZZ 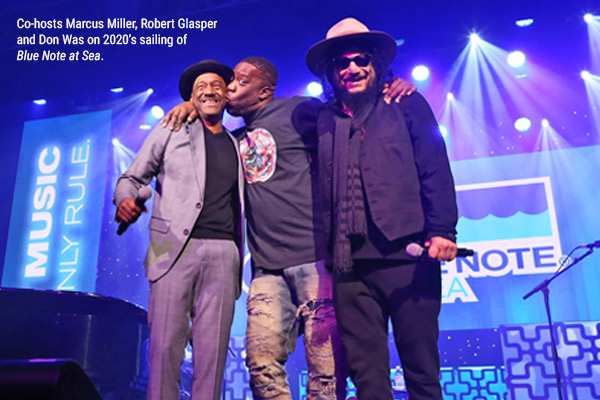 They say that we learn from our mistakes. If that is true, then Entertainment Cruise Productions – Jazz is one smart cookie. In fact, we have a PhD in jazz cruise flops. Having said that, though they may not have been financial successes, each cruise program that failed to attract a huge audience still proved to be an amazing musical success.

Now back to our story. One of the suitors was MOJO, one of Europe’s most esteemed musical producers, and the force behind the North Sea Jazz Festival, arguably the largest jazz festival in the world at that time. Located in Holland, the festival had been at The Hague for years and had just relocated to Rotterdam. In the beautiful city of Delft, MOJO presented a compelling argument that its influence and reach would support a summer cruise in the North Sea that would wind up in Rotterdam and provide a “hotel” for its guests for the festival. So confident of their ability to fill the ship, MOJO insisted upon having the right to market 75% of the staterooms. Entertainment Cruise Productions would market 25%, produce the cruise in terms of its operations and share in the “profits.” That a lot of time was spent defining “profits” in the document proved to be a fool’s errand, as the cruise produced a lot of great things, but “profit” was not one of them.

MOJO’s marketing plan failed and it was up to ECP to fill the ship. Further, MOJO abdicated its role as producer, leaving Michael Lazaroff to arrange for guest transportation and other amenities in Holland for the time that the cruise would be docked in Rotterdam. Remember, MOJO was located in Delft, Holland. Yet, Michael spent months flying back and forth for meetings and more. Each morning he would awake and either stay in Delft for meetings or board the train and go “left” to Rotterdam or “right” to Amsterdam. Thankfully, Delft was a lovely place to stay and that May and June were a nice time to be in Holland.

Marcus Miller was the host, his first time in that role and he assembled an amazing lineup including Herbie Hancock, McCoy Tyner, David Sanborn, John Scofield, Dee Dee Bridgewater, James Carter, Roy Hargrove, Kirk Whalum, and so many others. Departing from Copenhagen in late June/early July, you would have thought that the cruise would have been a nice summertime experience, but someone forgot to tell the North Sea that it was summer. It was cold, wet and windy the entire time. Miraculously, though, every night in Rotterdam, when it was time for the North Sea Jazz Festival to begin, the sun came out and it was beautiful. For the Americans onboard, experiencing summer in northern Europe was wondrous as it stayed light until almost midnight. For many of the longtime cruisers of Entertainment Cruise Productions’ programs, the North Sea Jazz Cruise in 2007 was the highlight of their cruise experience. Much of the cruise was captured on film. You can enjoy it by clicking here!

And, though there are other cruise programs that feature “smooth jazz,” The Smooth Jazz Cruise was the first one and continues to set the standard of excellence in terms of the breadth of its lineups and dedication to the music. No smooth jazz cruise offers more music from more top Artists.

In many respects there are walls around both “straight ahead” and “smooth jazz.” For the most part, a performer or a tune was either in or out of those categories. Most of the world, however, did not abide by those categories and their music was more contemporary than “straight ahead” and more jazzy than “smooth.” Probably the only way to describe the music is to identify the players. The lineup for the North Sea Jazz Cruise reflected this idea and Entertainment Cruise Productions would not allow its inability to successfully produce that cruise impede its goal of creating some type of “contemporary jazz” cruise to join The Jazz Cruise and The Smooth Jazz Cruise.

Being able to describe the cruise was always an issue. Finding a name that would convey the idea was paramount. “North Sea Jazz” was believed to have been a name that did so, but it was too European in terms of marketing a cruise. And, as was learned, cruising the North Sea was no one’s idea of a grand time. It was determined that this concept must rely upon American guests accounting for the majority of the staterooms and with International guests reserving the rest. What could be more American than Playboy!

So, in 2009, virtually the same lineup, with a few modifications, gathered under the leadership of Marcus Miller for the first Playboy Jazz Cruise. “Playboy” certainly had name recognition and word of the cruise spread easily, particularly after its public announcement from the Playboy Mansion, of course, and from the words of its maestro, Hugh Hefner. But it soon became obvious that there were two sides to this notoriety.

For those in the jazz world, Playboy Jazz was iconic. Whether it was the performances on Playboy After Dark, the late-night show on Saturdays that featured the top jazz musicians in the world or the annual Playboy Jazz Festival at the Hollywood Bowl, famously hosted by Bill Cosby, “Playboy” was a jazz brand. But it was also, and much more popularly, a brand for racy pictures.

Some prospective guests were upset when they learned that there would not be Bunnies on the cruise. Others feared that there would be Bunnies. Proving the middle ground was difficult. In the end, much to the surprise of everyone involved, finding passengers was difficult. Again, the cruise itself, a tribute to Marcus and the musicians, was amazing. Guests still talk about the cruise today.

It was also in 2017 that Entertainment Cruise Productions moved its jazz programs from Holland America Line to Celebrity Cruises. The new ships had venues that were perfect for music. There were now three large venues created just for entertainment and a fourth, the main dining room, that could be converted in the afternoon and at night for cabaret-style shows. It is no wonder that the same urge that brought on the North Sea Jazz Cruise and the Playboy Jazz Cruise would resurface, this time under the banner of Blue Note at Sea. Unlike its predecessors, this cruise has sailed 4 times and would have sailed a fifth time but for a scheduling issue caused by the pandemic.

Rumors abound as to the future of Blue Note at Sea. Resurrecting the cruise would require “getting the band back together,” as the right to use the name Blue Note has expired and the entity that owned the cruise has disbanded. But, the notion of doing so, and continuing to include a contemporary jazz cruise program along with The Jazz Cruise and The Smooth Jazz Cruise remains alive and exciting. The pursuit of this cruise concept has an “Ahabian” tinge to it. But, as the pursuit of any Great White Whale would be, there is great anticipation and attraction to do so. In other words, stay tuned.

So, as you can see, not all the programs of Entertainment Cruise Productions have had the longevity and vitality of The Jazz Cruise and The Smooth Jazz Cruise. Yet, the pursuit goes on. This note began with the adage that one learns from one’s mistakes. Perhaps it should have started with a different old saw for the pursuit of a contemporary jazz cruise … if at first you don’t succeed, try, try again.